Why you should support Canada’s bill C-51 terrorism bill.

To my great surprise, the Canadian government’s attempt to enact a terrorize-Canadians bill is actually getting noticed.  There’s even been protests. 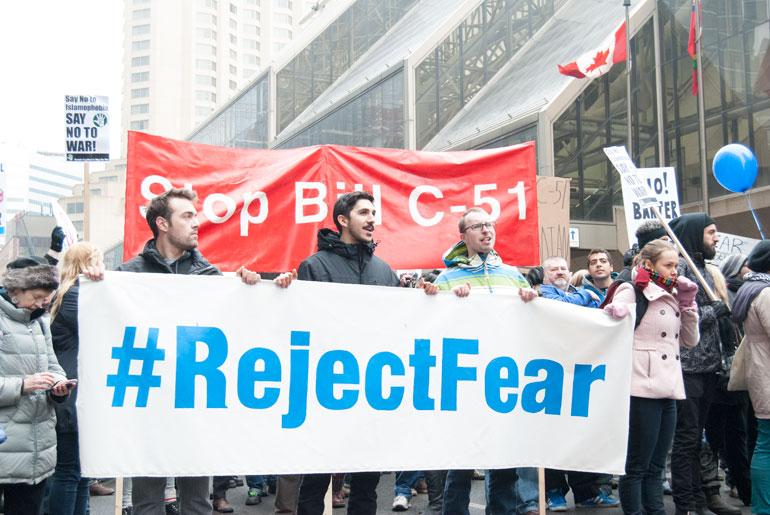 For those who find this objectionable, the stopc51 website makes it easy for people to write a form letter to their representative, but what about all those people who want to support this bill? There’s no startc51 website for people to use!

For all those people, I’ve drafted a form letter that they can use, based on the stopc51 form letter. I’m paper mailing my copy of this letter, with the hopes that a paper letter requires slightly more work to throw out. The civil servant who’s job is to press the delete key can file a union grievance against me.

EDIT: I ended up with a response to my original C-51 letter.

[your name and address, including postal code]

cc: [who else should get a copy of your letter?]

Note that mail may be sent postage-free to any Member of parliament at the following address:

Name of Member of Parliament
House of Commons
Ottawa, Ontario
Canada
K1A 0A6

Yes, we still pay for that “free” mail service through taxation, but I’m going to justify my exploitation of that service as a fair exchange for all the time that I have to spend weeding through the huge stacks of junk mail that Canada Post delivers to my mailbox daily.

My last letter to my “representative” (John McCallum) in parliament about bill C-51 went unanswered. I don’t really believe that I am represented by virtue of having voted or not. Will the actions of the Honourable John McCallum of Markham-Unionville surprise me, or make me doubt this position?

EDIT: as noted above, I did get an answer to my original C-51 letter.  It was neutral in tone, and matter of fact, giving no hint of whether or not the bill will be supported.  What sort of response will this letter produce if any?